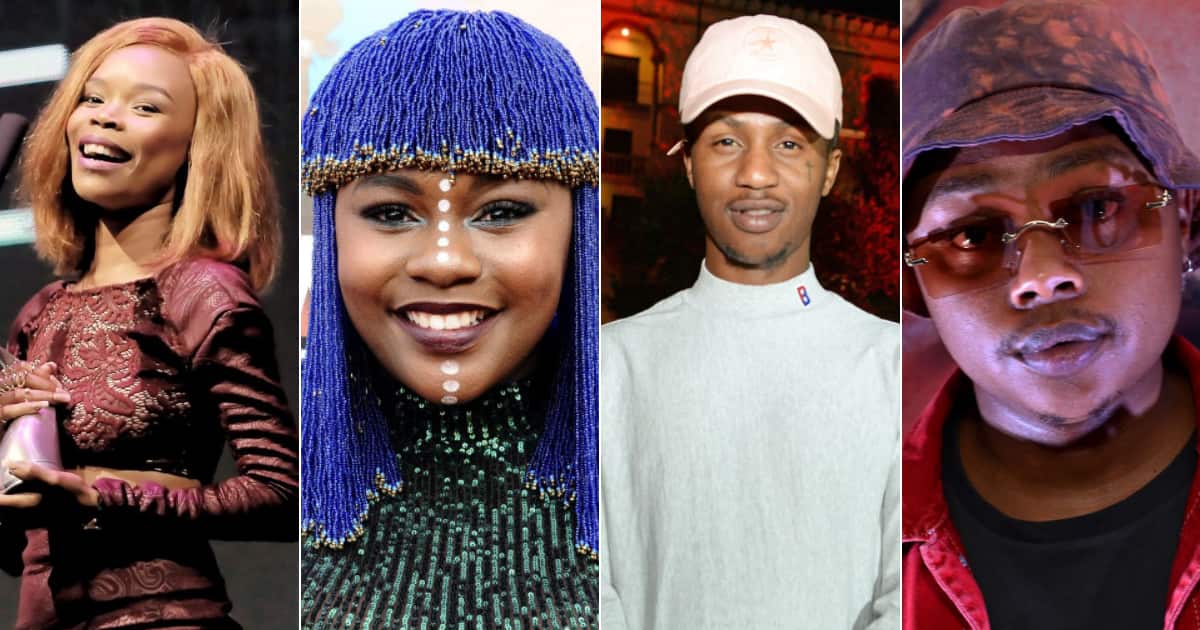 How Amanda Black, Fifi Cooper, Emtee and A Reece All Escaped Ambitiouz Entertainment

Local record label Ambitiouz Entertainment is a music company known for bolstering its artists. From high-profile lawsuits to heated Twitter rants, it seems some of Mzansi’s most notable musicians have struggled with the slippery label.

PAY ATTENTION: Click “See First” under the “Next” tab to see Briefly News on your News Feed!

While Amanda Black gave Ambitiouz props for helping her find her unique afro sound, things got tense after the muso started asking about her money.

In 2016, Amanda was at the top of her game with the release of her hit album, Amazulu. And while the former Idols SA contestant was booked and busy, it certainly wasn’t showing in her depleted bank account.

Do you like reading our stories? Download the BRIEFLY NEWS app on Google Play now and stay up to date with top South African news!

Tithes and offerings: My church paid for my tuition all the way through college – a lady shares her experience

When she asked label officials about the money owed, she received the same vague response:

“They said, don’t worry. Manage the music and we’ll take care of the finances. It wasn’t going to work for me. I needed transparency… I was playing but I wasn’t getting paid. When I called to ask why, I was given answers that made no sense that I owed money instead,” she told Drum.

The award-winning singer says things got unbearable when she had to dip into her own savings to pay for rent, transport and even the band. Pushing through the challenges, Amanda continued to show up for her concerts despite the financial pressures:

“I didn’t want to tarnish my reputation and be the girl known for not performing at concerts,” she added.

Despite her fears, Amanda made the difficult decision to leave the label and file a million rand lawsuit for all the money owed to her. She won her case in early 2020 and encourages more artists to defend themselves:

“People told me to back off because I was nobody to fight a giant…I just hope other artists are resilient because a lot of people are going through what I went through,” a- she added.

Motswako rapper, Fifi Cooper had a similar problem with her finances. The single mother of one had worked hard for the label for over 2 years but complained about its lack of financial progress.

“Whenever I asked him about the funds, there was always a fight… That’s why I left, because I don’t feel like I’m getting paid the way I should,” said said the rapper.

The 30-year-old further denied claims that she was fired.

the Pearl Thusi hitmaker has never been shy about venting his bad feelings for his former label. In 2019, things turned sour when Emtee took to Twitter, accusing Ambitiouz executives of limiting his opportunities.

The rapper claims to have been refused several requests to collaborate with major artists. He also alleges that he was prevented from attending award shows in a bitter attempt by management to delay his career, The South African reports.

Online sectionthe 29-year-old also complained after his behind-the-scenes music video was closed, saying not enough was done to market his recent projects.

Getting very emotional, the once-poor rapper says he didn’t expect the same financial hardship as a great rapper.

Check out the now-deleted tweets below:

“I’m not going back to the streets bro. I don’t want to sell drugs or rob people to survive or save for a video.”

Lady Du Talks Financial Wisdom, Asset Investing, and Hustling: “I Save 80% of My Total Income”

“I’m in the studio every day making music without even knowing if it’s going to drop one day.”

“I was nominated for a BET a year ago and this nigga made sure I didn’t go.”

After months of fierce legal battles, the rapper announced that he had parted ways with Ambitiouz Entertainment in August 2019.

Rapper, A-Reece has built a highly successful career and a cult following since leaving his label. the Meanwhile in Honeydew musician went on national television to explain his side of the story.

Speaking to V-Entertainment, the rapper said he never signed a contract and therefore never had any real obligations. He also blamed mismanagement for ruining his brand and reputation:

“It was a pending thing for me, you know, because I see what’s going on, through my brand and stuff. So I decided to leave a long time ago,” Zalebs reports.

The rapper further shared that he was encouraged to leave after seeing his label colleagues call him. The 22-year-old rapper says he only wanted to focus on music but was forced to open his eyes and take a closer look at his contract after all the drama with other artists:

“I started looking at myself as an artist, correlating to the label and started realizing some of the things that I didn’t want or even wanted,” he added.

And with the recent departure of musician Intaba Yase Dubai, Ambitiouz Entertainment adds another artist to its growing list of failures. It seems that this local label has not yet learned their lesson.