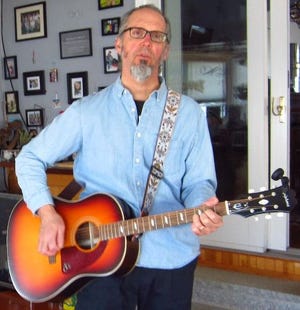 Jim Baumer’s initial request immediately struck a chord. It wasn’t the usual type of dialogue, “Hey, here’s my record. Consider it for reviewâ€¦”. It was a heartbreaking snapshot of a man who took up music as a way to cope. In his own words:

â€œMy story is not the usual narration of a boy who picks up the guitar, gets pretty good, writes a few songs and hopes to hit the mainstream. Mine is more; the man has a guitar he never plays much of. . Just enough to be a frustrated budding musician. Life gets in his way. He starts a family, like a latecomer finds writing, but music remains one of his passions. He always wants to play the guitar, but the rarely does.

The man has a son whom he loves very much. Son becomes a poet, performance artist and activist. Son walks around, some sort of vision quest, and is killed. The man is devastated. Pick up the guitar and start playingâ€¦ â€

And so, Jim Baumer’s latest song collection, “All You Stupid Sheep”, was born. And, if you’re a Robert Pollard and Guided By Voices fan like me, this is sure to fall into your wheelhouse.

EDGE caught up with Mr. Baumer to learn more about his heart-wrenching history and the songs that flowed from the tragedy and trying to navigate this strange place we all live in.

EDGE: Let’s talk about â€œAll You Stupid Sheepâ€. This is your first collection of tracks, isn’t it? How does it feel to have them “in the world”?

Baumer: I felt like I had reached â€œcritical massâ€ with songs that I had written over an 18-20 month period. Being very familiar with the EP releases of being a huge indie rock fan of the 1980s and 1990s, I knew that â€œAll You Stupid Sheepâ€ fit the bill in terms of being a legitimate first release for me.

Bandcamp is a great platform – both in terms of equity for artists – but also, it gives you a place to direct people to find your music.

EDGE: You haven’t written songs for so long. What brought you into it?

Baumer: After my son, Mark, was killed, I was pretty destroyed. I was struggling with depression and found ‘something’ when I picked up the old Yamaha acoustics on a particularly dark afternoon. It was in the summer of 2018. I started playing every day. Sometimes it was only for 15 minutes. But over time my time spent playing increased. I added an electric to the mix with a Vox combo amp, and I was on my way. In 2019, I wrote my first song, “Walking Down the Road”, about Mark and his last step. I’ve written about 25 songs since.

EDGE: Tell us about writing in general. Sounds like you do a lot of it, even outside of songwriting for personal music projects.

Baumer: I have been a writer for over 20 years. I pulled out four books, including two on Moxie, the New England-based soft drink. I’m a blogger and have had some pretty prolific periods, although I’m not as focused on narrative stuff at the moment given my passion for music.

EDGE: I understand there is a pretty heavy story involved here. Tell us about this (and also, I’m incredibly sorry to hear about your son – I can’t begin to imagine this painâ€¦)

Baumer: Mark Baumer was a poet, performance artist and committed activist. He had walked across America in 2010 in 81 days just to see if he could do it. During her last walk, which began in 2016, this walk focused on her concerns about climate change. He wanted to raise the bar and raise awareness by doing the barefoot walk while helping to raise $ 10,000 for an activist collective he was a part of in Providence (where he lived) called FANG, which opposes the proliferation of gas pipelines. On the 101st day of his walk (which he captured via YouTube videos using his phone to film, edit, and post), he was punched and killed in Florida, along a long straight in the Panhandle area . The woman who hit him was intoxicated and never had a drug test at the scene.

EDGE: Your son seems like a fascinating person. I know it’s probably hard to sum up who he was in a short space, but let us know how he inspires you.

Baumer: Mark seemed to have the capacity to succeed in whatever he decided to do. I think he gets some of that from his parents.

He used to tell me when we were talking about writing: I’ve been a freelance writer for some time, and based on your own experience, you know that writing and paying bills can be a tough job sometimes.

Mark often told me when I was talking about doing something else to “keep doing what you’re doing, dad”. I often hear this in my head when I want to stop playing music because, to be honest, being a rock and roller pushing 60, it sometimes feels like that crazy â€œstretchâ€; yet, i don’t know what else i would do now if i didn’t write songs, if i didn’t write my guitar tracks, in my free time when i’m not working or sleeping.

EDGE: How has music â€œhelpedâ€? What did you and did you get out of the experience of putting these songs together?

Baumer: For me, having written for a long time, sometimes I feel like I can do something with a four minute song that I can’t with a 3000 word essay. Then I can play this song countless times, live or during some of the things online that I tried to get out, like Rock and Roll Church.

EDGE: What do you hope people take away from experiencing your music?

Baumer: My music has a populist element. I identify with the little guy. The little guy is being fooled right now by tech elites and billionaires like Bezos. I hope people â€œhearâ€ what I’m saying about things in our world in songs like â€œDivide and Conquerâ€ and â€œLiving in This Worldâ€. But in the end, who knows? Does my music move the dial at all? I am not sure.

EDGE: Do you have any musical influences to name? I hear Robert Pollard (Guided by the Voices) here. I think he would appreciate the lo-fi-ness of these recordings.

Baumer: Lo-fi is definitely a big part of my influences: yes, GBV, Swearing at Motorists, a guy named FM Cornog (recorded as East River Pipe), noise rockers from LA, No Age, X ( also from LA), punk (Sex Pistols, The Clash), and then Marc Bolan’s thing with T Rex is something that I work on in some of my own stuff, especially some of my acoustic stuff.

EDGE: At that, tell us about your registration process. I hear a drum machine, leading the charge, then you jump on the six strings and bang furiously. What else is part of the plan?

Baumer: I’m just figuring out the recording stuff. I am using a PreSonus AudioBox inserted in my laptop. It’s a very basic DAW with only two inputs. I have to find ways to get the sound in and out of a little PA. I mixed with the open source software Audacity.

Drum tracks are something I had to adopt because I was unlucky to find a drummer. And being a true believer in the DIY culture, you understand how to get by. I’ll probably try to be a little less lo-fi in the future, but it’s a process.

EDGE: What’s the next step as you continue on this musical journey?

Baumer: I’m looking to land a few concerts. I’m excited. I’m going to hit some open mics in the area. But I want to go out and play live.

I’m also looking to go back to some of the songs I’ve recorded before, remix them and pack them with new things I’ve written. I will release it as a CD in the fall, most likely. I would love to do vinyl, but it’s probably further in the future.

Visit www.jimbaumerme.bandcamp.com and www.jimbaumerexperience.com for more information on Baumer and a schedule of his New England concerts.