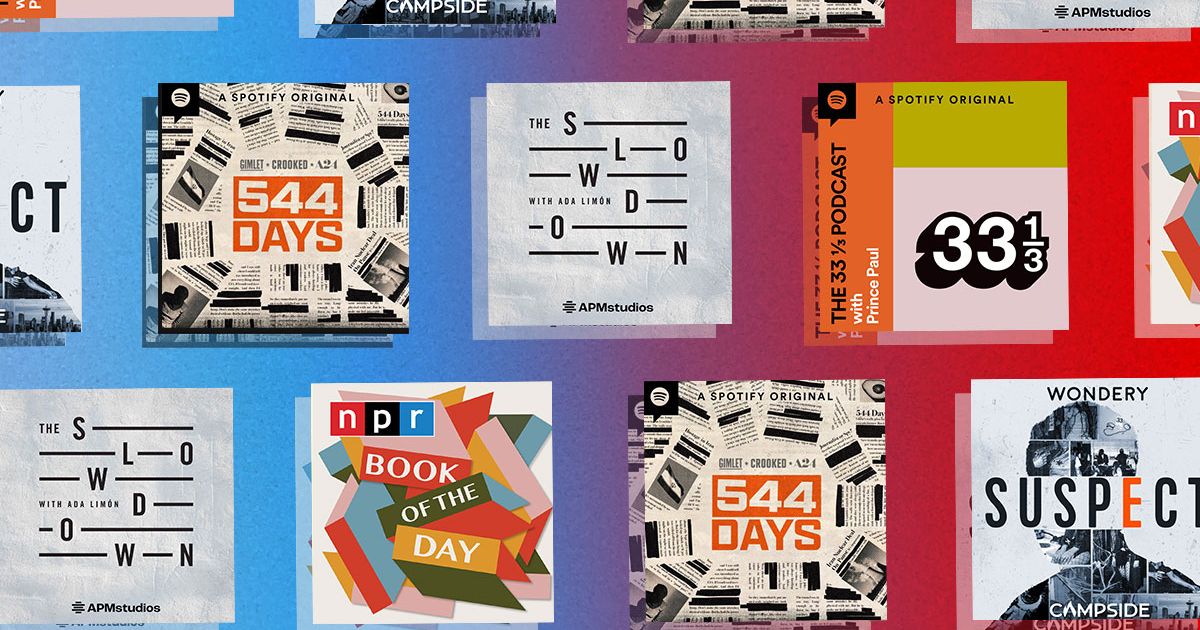 This article was featured in 1.5x Speed, new Yorkthe podcast recommendation newsletter. register here to get it every week.

One quick thing before we start: seeing as we’re about to enter October – the month of Halloween, aka Spooky Season – I’d love to stream more spooky podcast choices over the next few issues. So tell me about the various scary / horror podcasts you’ve enjoyed over the years! If I have enough, I will launch them as a choice of mass readers.

And also, as always, tell me what you listen to more generally. Find me on Twitter or contact me by email: nicholas.quah@vulture.com.

Let’s start with a little background. The 33 1/3 The book series, now published by Bloomsbury, specializes in publishing music reviews in short book form, where each entry delves into a specific famous album. I have inexplicably acquired about a dozen of these little books over the years. Well, maybe a little more than that; I keep finding more every time I clean my home office. Anyway, a lot of what speaks to me 33 1/3, I guess, has to do with the somewhat eclectic nature of the people who write them. You have music critics, of course, as well as music academics and academics in training. But you also have an occasional writer-musician – John Darnielle of the Mountain Goats, for example, wrote an entry on Black Sabbath’s. Master of reality in 2008. Generally speaking, the books are hit or miss, but as someone who knows almost everything about music, I always find them informative to say the least.

This means that I paid quite a bit of attention to launching The podcast 33 1/3 earlier this month. The show originates from Spotify Studios, where it joins a growing stable of music podcasts developed by the company purported to capitalize on its pre-existing music consumer base, and it showcases the hosting talents of Prince Paul, the music producer and DJ. .

The podcast 33 1/3 is less an adaptation than an effort to build a new VH1-style musical variety program on the back of the book series. There’s a pretty intriguing concept behind the series here: Each episode revolves around a different book from the series, which is associated with special celebrities who are somehow related to the album in question. They may have been contemporary with the time of the album or simply inspired by it. The typical flow of an episode is structured around a conversation between Paul and the guest, with narrated excerpts from the book that give the interlocutors something to respond to from time to time.

I admit it: I was disappointed with the vanity. Aren’t there enough platforms for famous guys in the music industry to remember stories about their time in the business? I guess I was hoping for something less celebrity-centric and something that values â€‹â€‹the roots of the book series as a criticism font.

And then I listened to the second episode of the podcast, which featured music critic Eric Weisbard’s book on Guns N ‘Roses’ Use your illusion I and II with two people who were present at the time and at the venue: Sebastian Bach of Skid Row and former MTV host Riki Rachtman. Sparks flew, as Weisbard’s arguments came into direct conflict with the perspectives of Bach and Rachtman.

A moment that marked me:

Commented extract: Part of the rock and roll mythology is that it opened up the distinguished culture to new outside voices: African Americans, working class southerners and the British. But the story that I lived or consumed is much more difficult. Because what about those – their numbers pumped up by wealth, education and protected youth in adulthood – who have fallen into the vile divide between the elite and the exotic?

Rachtman: Well, first of all I have to comment on what I just heard, because that was just a lot of poop.

The controversial mood extends throughout the episode: an excerpt is played, then Bach and Rachtman aggressively protest. Of course, Weisbard is not present in the recording to defend his arguments or clarify what he meant by one of the excerpts, as the series chooses to present the excerpts from the book in the absence of the critics. themselves, which is a bit disappointing. But it’s still a captivating listening. By the end of the episode, Bach and Rachtman have exhausted their punches so much over Weisbard’s arguments – are they hitting? Punch ? Not clear – that the very concept of the series seems burnt out.

It’s likely that this Guns N ‘Roses episode is just one stellar example in what’s supposed to be a more straightforward show. The other two episodes that have now been released feel a lot cooler, with every element of the series more aligned. But the Sparks in this second episode show what might be the most interesting thing about this show: how it could serve as a space where subjects could directly engage in critiques of their work.

I still don’t know what to do with it Suspect.

On the one hand, Campside Media and Wondery’s True Crime Investigation Podcast is so straightforward, clinical, and proficient in its delivery that it’s almost anonymous. When trying to describe the show to someone else, I often end up focusing exclusively on the details of the case being investigated rather than on any aspect of what’s distinct in it. the show or what she’s trying to say.

On the flip side, I’m pretty sure this show is going to make my top ten list of the year, and I’ve compulsively inhaled each of the five episodes currently available for wide airing. (By the way, the entire season is for members of Wondery +, the premium subscription program of the podcast company owned by Amazon Music.)

I will deal with this tension later in a more comprehensive review. For now, the details: Suspect picks up on the unsolved murder of Arpana Jinaga, who was killed on the night of a Halloween party at her apartment complex in Redmond, Washington in 2008. The fact that there was a party and that having no witnesses makes the case a real thriller, which is based solely on circumstantial evidence and DNA – something a senior county prosecutor said to the Suspect team in the fifth episode, is apparently something that is no longer very common.

For all intents and purposes, the series is a re-investigation of the case, rather than just a chat, with the team, led by Matthew Shaer and Eric Benson (both magazine reporters turned crime podcasters who previously collaborated on On my corpse), traveling the Redmond area to re-interview suspects, speak with experts, file registration requests and extract archival tapes. I stick with this one until the end.

?? By the way, if you really enjoy real crime podcasts, consider this a periodic reminder that we are also releasing a regular “This Week in Real Crime Podcast” feature on the site as well. This week’s choices from contributors: “worship-adjacency” on DIE-ALOGUE, New England Vampire on Morbid (make people on What we do in the shadows to count?), and Impostors: the commander.

?? This could be an incongruous recommendation for a newsletter called 1.5x Speed, but I would like to report the return of The slowdown with Ada LimÃ³n, who delivers a shot of poetry every day of the week. Listen, we are temporally omnivorous here.

?? 544 days, the audio adaptation of Jason Rezaian’s account of how he and his wife fought to regain their freedom after being wrongfully accused and jailed by the Iranian government for espionage, is released this week.

?? NPR has launched a new daily books podcast called, descriptively, NPR’s Book of the Day. According to the description of the show, starting today, the news feed will feature 15-minute interviews with authors every weekday. In good timing, the launch comes shortly after the organization announced a new editor-in-chief of culture: Nick Charles, who comes from Black word. Anyway, I’m glad to take it. I don’t listen to a ton of book podcasts other than the occasional episode of The Maris review and Reading glasses, but it seems like a great opportunity to keep up to date with the book world.

?? It’s been a big week for Since when Fans. (â€œGoners,â€ as the hosts kind of call them half-jokingly?) The â€œbicoastal eliteâ€ podcast has got itself a New York Times profile last Wednesday, with stylish portraits of hosts Chris Black and Jason Stewart (including a very How to do nothing). Meanwhile, later in the week, Stewart wrote a review for the Dirt bulletin about a recent episode of Malcolm Gladwell Revisionist history, which combines the good humor of the company with an equally special immersion in the lifestyle of his subordinates. Either way, all of this is clearly a solid promotional introduction to the duo’s upcoming live tour, which kicks off this Friday in Atlanta.

For what it’s worth, I’m a very regular listener to the show. I’m not quite sure why, as I tend to be only marginally interested in contemporary notions of cool, #brands, and things that are ‘on fire’. And yet, I can’t take my ears off this thing. I will leave the self-analysis at a later date.

?? Congratulations to Hanif Abdurraqib and Walking Radio‘s Daniel Alarcon on being named MacArthur Fellows in this year’s batch!

And it’s a wrap for 1.5x Speed! Hope you took advantage of it. We’re back next week, but in the meantime: send podcast recommendations, comments, or just say hello to nicolas.quah@vulture.com.

1.5x Speed: A weekly newsletter of podcast recommendations and reviews


By submitting your email, you agree to our terms and Privacy notice and receive emails from us.

An Amazon Prime benefit will disappear next month. Here’s what that means for your membership