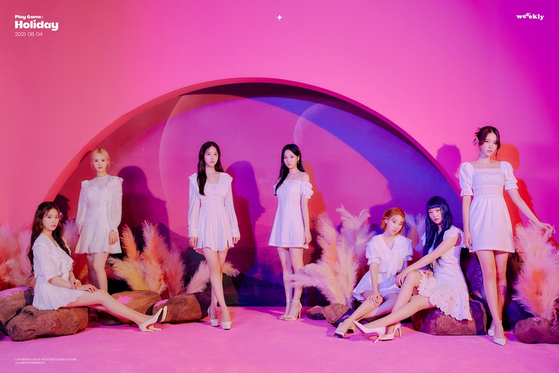 Rookie group Weekly’s “After School” came in at number three on Spotify’s list of “10 Best K-Pop Songs of 2021,” unveiled on the streaming platform’s social media accounts on Tuesday.

The list names hits from popular K-pop groups including aespa, ITZY, BTS, and Twice. Ratings are decided based on song streams from Spotify’s “K-Pop Daebak” playlist, with aespa’s “Next Level” (2021) entering at number 1.

â€œK-Pop Daebakâ€ is Spotify’s first K-pop editorial playlist, launched in 2014. As of December 24, the playlist had over 3.3 million followers.

â€œFor a band that is just over a year old, Weekly wasted no time in establishing a branded, sparkling sparkling sound that they can really make their own,â€ NME said in the article.

â€œListening to ‘After School’ by Weekly is like getting a dopamine boost,â€ TIME said.

Weekly are a seven-member girl group who debuted in June of last year with the song “Tag Me (@Me)”. â€œAfter Schoolâ€, the flagship track from his third EP, â€œWe playâ€, released in March, landed at # 1 on Spotify’s Viral 50 Global chart.

Weekly WTF: When did it become taboo to go shopping?